We are going to explain you what to see in Villajoyosa, a town in the province of Alicante. With 3000 years of history and 15 km of coastline, this fishing village on the Costa Blanca is a corner away from mass tourism. With a special charm, cradle of Chocolates Valor, city of the Moorish landing and watered by the river Amadorio.

La Vila Joiosa is the capital of the region of La Marina Baixa and has 33,000 inhabitants. In this region you will find villages like Benidorm (5 minutes away), Altea, Alfas del Pi, Polop, Guadalest, Orcheta, Finestrat or Callosa d’Ensarrià among others. People’s opinions agree that Alicante is one of the best areas to visit in Spain. It is one of the most beautiful villages on the Costa Blanca.

The old town of Villajoyosa is an Asset of Cultural Interest. You already know that in the historical centres you will walk through narrow cobbled streets. But here, too, among fishermen’s houses surrounded by a great Renaissance wall (16th century).

As is typical, the old town of La Vila Joiosa also has a Fortress Church around which the walled town developed. It is said that the houses are colored because that way the fishermen could tell which house was theirs from a distance and if sheets or other items were hung up it was a sign that something had happened. But these are just guesses. Travelers love the neighborhood because it has great places for photos.

Inside the old town we will find the Town Hall, a rather hidden building that looks like just another house. From here it governs for the almost 34 thousand people registered in the census. 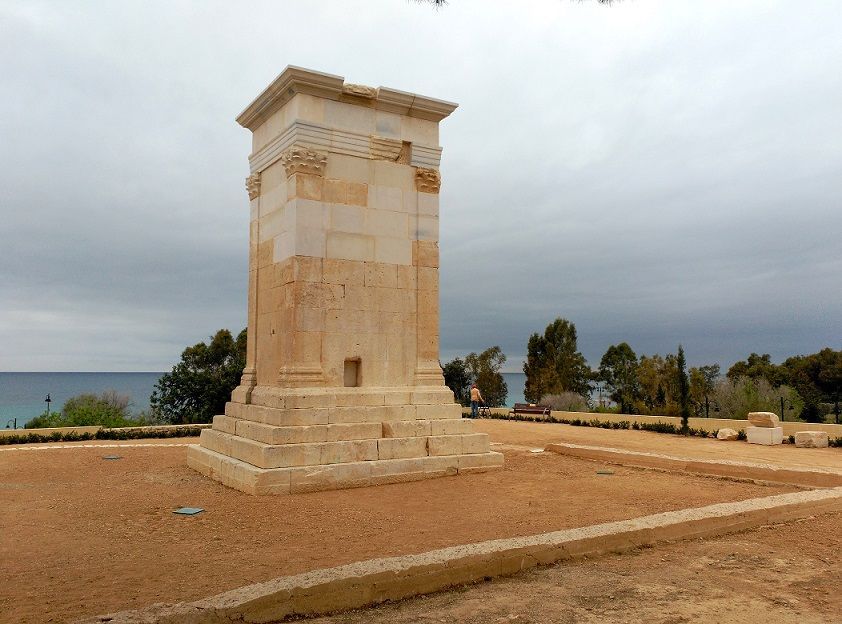 In La Malladeta there are two monuments. An Iberian sanctuary built between 375 B.C. and 350 B.C. in honour of the Goddess Mars and a masonic palace belonging to a friend of Blasco Ibáñez built in 1905. You will be able to see a construction like the watchtowers that can be found all along the coast of Alicante. These towers were used to warn of corsair attacks or invasions.

La Barbera is a 17th century farmhouse that belonged to the Aragonés family, who settled in La Vila Joiosa at the time of the Reconquest.

Watchtowers on the Costa Blanca

Watchtowers bathe the Mediterranean coastline. The Aguiló and Xarco were used to warn of pirate attacks.

From the Torre del Aguiló (in the Cala de La Vila) you can have a breathtaking view of the skyscrapers of Benidorm and its skyline. From the Xarco Tower, you can see Alicante, San Juan, El Campello and the Loma de Rejas Tower.

VALUE: THE CHOCOLATE FACTORY AND MUSEUM

The Valor brand is the pride of La Vila. Multinational chocolate manufacturer created in 1881 and pioneer in its sector, is today an example of a successful family business.

We can visit for free the Museum of Chocolate, to finish the tour in the factory and the shop to take a souvenir.

Other Chocolate Factories in Villajoyosa

We cannot deny that apart from the cultural interest, the region of Marina Baixa has no other attractions.

The beaches of Villajoyosa have crystal clear waters and are not overcrowded and little exploited by tourism. As we said before, there are 15km of coastline and although they are not all of fine sand are the perfect place to relax and photograph unique views.

La Vila has many years of nudist tradition in some of its beaches. We leave you a post about the best nudist beaches in Alicante, in case you are interested.

One thing La Vila stands out for is its beach bars. Go at sunset and have a drink, or you can have lunch and dinner after a hard day at the beach. The beach bars of Villajoyosa are these:

Although you can eat “peix” (fish) in many restaurants, here is a list of the ones we recommend:

The Mostra de Cuina Marinera is of special interest. These are days in which the restaurants of La Vila are involved and offer traditional seafood dishes for a few days, at very good prices. Like the pintxos and tapas contests, but for seafood dishes.

In the 16th century, in 1538, the Barbary pirates of Zalé-Arraez attacked the village. Before the ships could land on the sand, Santa Marta caused a flood that helped the locals prevent the Barbary ships from reaching the coast. In gratitude for this miracle, La Vila named Santa Marta patron saint of the town and in her honour the Desembarco moro (Moorish landing) is performed every year.

The Moors and Christians of Villajoyosa are the popular festivities for the “vileros”. They are of International Tourist Interest. During these days we recommend to see the parade of the Moorish and Christian “Filás” and the Moorish Disembarkation. Don’t expect to find any shops open, as the town lives for “Moors and Christians” and almost all the inhabitants are part of some “faction”.

In general, the main events of the Moors and Christians festivities are the entrance of the bands, the parades, the cache, the embassies, the paellas and the parade of floats.

The holidays would have been celebrated in 2020 from the 24th to the 31st of July. They are always the last week of July. The landing on the 27th, at dawn.

Main event of the festivities. The beach is filled with a theatrical landing with Barbary ships and fights on the sand. Blunderbusses, bombardment, drums, fireworks? The fight is staged on the beach between Christians and Muslims, who invade the village, but a few hours later it is reconquered.

You have to go with time and pay to get a place in the stands.

As we have already mentioned before, she is the patron saint of La Vila for her help to the locals in the battle against the pirates. The church of Our Lady of the Assumption has the Chapel of Santa Marta, if you want to stop by and see it.

But on May 8, 1653 the image of the patron saint that rests in the Church of the Assumption wept for 2 hours. A notary recorded this “miracle” in a notarial act. That day coincided with Philip IV authorizing the construction of a reservoir in Relleu (a nearby inland town) to irrigate the Huerta. This brought the population from 1700 inhabitants to 4200 and a great improvement to the capital of the Marina Baixa region.

Villajoyosa is a town of Phoenician and Iberian origin which later became Roman. During the Iberian period it was Alonis, a colony of Marseille, and later became Allon during the Roman Empire. Allon got the title of Municipium and depended on the region of Tarraco. It is believed that the centre of Alonis was in the Plaça de la Generalitat, on Carrer Colón, in the centre of the present town. Around the urban area was the Roman cemetery. At that time there was no such thing as a house with a colourful façade. The Amadorio river played an important role in the creation and evolution of the municipality. By the way, the river has the same name as the reservoir it comes from, the Amadorio reservoir. 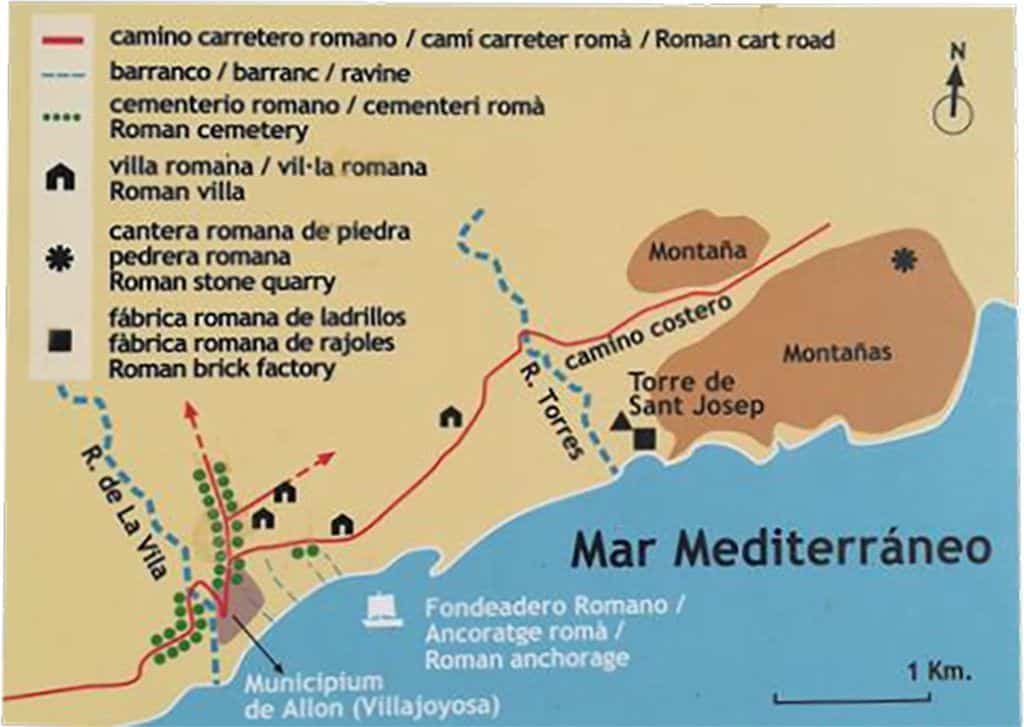 It is called VilaMuseu and has been internationally recognised as an example of accessibility. It keeps collections of archaeological remains recovered in La Vila Joiosa. The VilaMuseu was a commitment of the city council, as was the idea of having a municipal archaeologist on staff.

THE IMPERIAL BATHS OF ALLON

It is common to find archaeological remains during any excavation. A few years ago, the Imperial Baths of Allon were found and are in a magnificent state of preservation. We are working, together with the VilaMuseu, on the conservation and musealization of the same. While the project is being executed they are covered with sand to keep them intact.

Things to do in Villajoyosa

Things to do with kids

HOW TO GET TO VILLAJOYOSA

If you are travelling around the Valencian Community, the province of Alicante with all its towns and villages is an obligatory stop. The coastal towns of Alicante are easily accessible and many, including La Vila, can be visited using the Alicante Metropolitan TRAM.

On your travel route through the best villages in Spain you can’t miss this area.

And if you liked our post, please, value the effort we have invested for you to get to know La Vila…

You can find out more about which cookies we are using or switch them off in settings.

This website uses cookies so that we can provide you with the best user experience possible. Cookie information is stored in your browser and performs functions such as recognising you when you return to our website and helping our team to understand which sections of the website you find most interesting and useful.

Strictly Necessary Cookie should be enabled at all times so that we can save your preferences for cookie settings.

If you disable this cookie, we will not be able to save your preferences. This means that every time you visit this website you will need to enable or disable cookies again.

This website uses Google Analytics to collect anonymous information such as the number of visitors to the site, and the most popular pages.

Please enable Strictly Necessary Cookies first so that we can save your preferences!